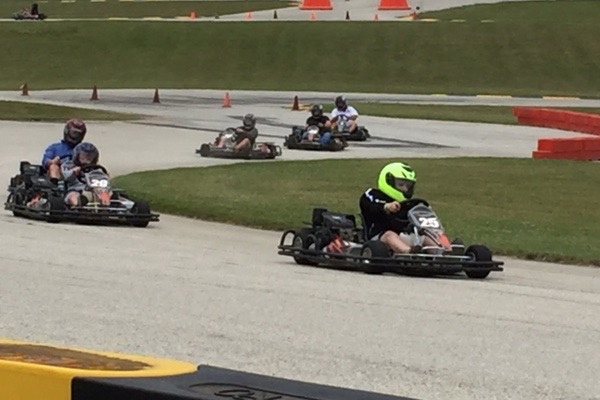 It was the weekend of the WeatherTech International Challenge with Brian Redman presented by Hawk at Road America and Autobahn Member Jensen Benét represented at the go kart track.

The weekend was filled with member Jeff Greens F5000 races but even so Jensen still broke away for a moment to continue his kart career. Many of you may be aware of the Road America 4 mile course,  but they also have a well laid out kart track with two configurations. Jensen looked over the kart course & concluded that while he prefers his home track at ABCC he may still be able to show a few of the locals a thing or two on this out of town course. The RA loaner karts were good but lacked the appeal of the Margay Ignite karts that Mike Gritter has introduced to us. Nevertheless Jensen adapted quickly & joined in his 14 car field for his heat races & feature.

Several of the locals were proficient on the course which allowed a few laps with Jensen drafting the leaders, but after those few quick laps Jensen passed for the lead & led the pack for the rest of the race. Jensen’s best lap of 0:49.524 was good enough to take the checkers by a margin of 0:.405 over the second place finisher in the feature.

There were high fives and smiles all around as Jensen thanked his parents Tara & Michael after the win, and contributed the win to his home team go kart group of Mike Gritter & Ben Coleman at the ABCC kart track.