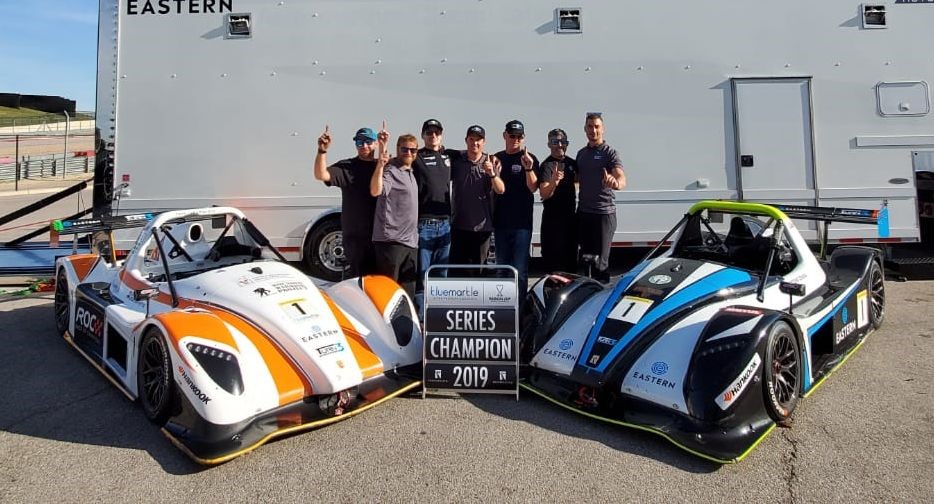 Austin, Texas (November 17, 2019) – In the team’s debut season, Turn 3 Motorsport and Antoine Comeau were crowned the overall champions of the 2019 Blue Marble Cocktails Radical Cup North America series during this weekend’s finale event at Circuit of the Americas in Austin. In addition to the outright title, the rookie team swept up the 1340 and 1500 class team and driver championships with drivers Eric Wagner and Antoine Comeau.

The victories came with their share of challenges during the three-race weekend at the famed F1 circuit. In Race 1, Comeau showed his tenacity right at the start, charging ahead to P1 before the end of the first lap. Later on, the Canadian suffered damage to the right front body work of his #10 ACR/Eastern/T3M SR3 1500 car, causing him to fall back and finish second in class.

In Race 2, Comeau’s determination to clinch the championship shone as he held off competitor Jordan Missig for the win. Race 3 was full of action and mishaps in the field, but both Comeau and Wagner held on to finish the race in fifth and third respectively and take the titles in each of their championships.

“Looking back, we had an outstanding year,” said Comeau. “I am very grateful for all the work from the team to ensure the cars were always perfect which allowed me to focus on driving without worrying about mechanical issues. I feel like our team strategy was also very strong, and we knew when to push for wins or drive conservatively to lock in the championships. Thank you to everyone on the team for their contributions in earning this title.”

Eric Wagner started the weekend with two fourth place finishes during Friday’s races. In Saturday’s Race 3, the driver of the #20 Eastern/T3M SR3 1340 car narrowly avoided contact with a perpendicular sliding car during a first lap incident, just slipping by to carry on with the 40-min race. Wagner continued to push forward, taking the 1340 class lead and challenging for the win. Unfortunately, a mistiming during the mandatory pit stop forced Wagner to take a third place finish in the final race.

Though he just missed out on a fourth race win in 2019, Wagner claimed the 1340 class championship title with consistency playing a key role in that victory. The veteran racer entered every event of the season and continued to improve his race craft throughout the year, earning a total of three wins and five podiums in the 18-race schedule.

“What a fantastic first year for Turn 3 Motorsport,” said Team Owner Peter Dempsey. “Eric and Antoine did a great job throughout the 2019 season and fully deserved their championships. A huge thanks has to go to all my crew, especially Emanuel Talquenca who led the team and the crew all year. Without him, none of this would have been possible. Our cars didn’t have one mechanical failure during any the races, and that shows that all the effort put in behind the scenes really paid off.”

“It was great to be part of the Blue Marble Cocktails Radical Cup series this season,” continued Dempsey. “Tom Drewer and his team put in a huge effort to give us a championship to race in, so thank you. Also thanks to all the series sponsors and partners. Roll on 2020!”

Though the Radical Cup is officially over, T3M has one more big event planned for 2019 – the 25 Hours of Thunderhill in Willows, California at the beginning of December. Competing in the endurance style race will be Eric Wagner, Antoine Comeau, Peter Dempsey, and Neil Alberico.

The team had a strong showing at last year’s 25 Hours of Thunderhill when they claimed the pole position and finished second in class and fifth overall, so the goal for the Chicago-based crew is to keep the success going and achieve an even better finish at the popular event this year.

Until then, viewers can catch up on the events of this weekend by rewatching all three races via the links below.