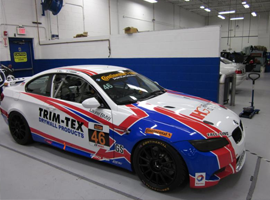 Buffalo Grove, IL (January 15, 2015)- Fall-Line Motorsports just completed the most successful season in their six-year history of competition in the Continental Tire SportsCar Challenge (CTSC) series and won the Driver’s Championship in GS with Trent Hindman and John Edwards and the Manufacturer’s Championship for BMW. Hindman will be back in 2015 to defend his title and will be joined by fan-favorite and Daytona winner Ashley Freiberg who returns to Fall-Line after competing in five races with the team in 2014. Also returning to Fall-Line for 2015 is Al Carter who will be joined by his 2014 teammate Corey Lewis. This two-car lineup will be a solid contingent to repeat for the 2015 Championship in their BMW M3s.