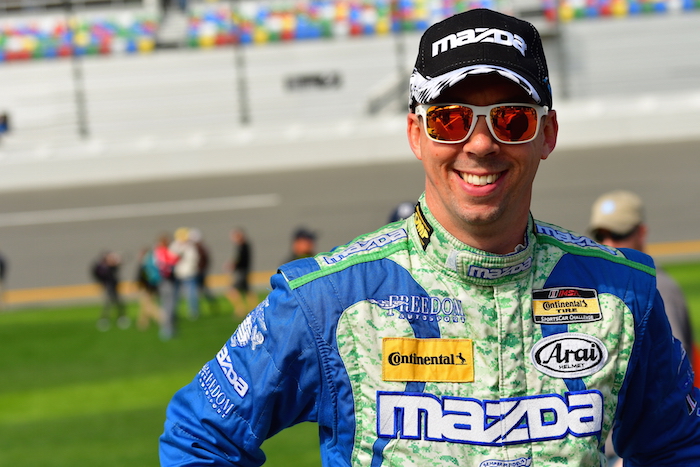 WATKINS GLEN, N.Y.—Freedom Autosport returns to racing this weekend at Watkins Glen, kicking off four races in just six weeks, and the team will have some special guests there to cheer them on in round four of the IMSA Continental Tire SportsCar Challenge Series.

The team is excited to welcome Dr. Jonathan Forsberg, the orthopedic oncologist who has operated on both of Liam Dwyer’s legs numerous times following an IED explosion in Afghanistan. Dwyer credits Forsberg with saving his right leg, and this will be the first time Forsberg has seen Dwyer race the No. 26 Semper Fi Fund Mazda MX-5 along with Andrew Carbonell. Britt Casey, Jr., will reunite with Matt Fassnacht in the No. 27 TRUMPF Mazda MX-5. The two previously drove together at Circuit of the Americas in 2014. Fassnacht has been enjoying an outstanding 2017 season in Pirelli World Challenge TCA.

In six races, he has driven his Mazda MX-5 to two wins, one second and three third-place finishes. His season to date also includes two poles, a new track record at Virginia International Raceway and a front-row start in five out of six rounds. Freedom Autosport will be hosting guests from two sponsors for the No. 27 Mazda, including TRUMPF, Inc. and Cushman-Wakefield.

Stevan McAleer and Chad McCumbee have several reasons to like Watkins Glen. They won the ST class there in 2015. Last year, McAleer and McCumbee finished fourth in the No. 25 ModSpace/Spartan Cargo Trailers Mazda MX-5. It is also the home track for McAleer, who lives in Putnam Valley, N.Y.

The race at Watkins Glen will get underway on Saturday, July 1, at 2:25 EDT. It will be broadcast live via IMSA.com and the IMSA app.

Opening Day is Only 57 Days Away